Pies Worth the Trek at Roseland Apizza

The gorgeous red pie with mozzarella at Roseland. Slick with oil and deliciously cheesy.

When Stephen, Margo, and I decided to make the 20-minute trek out to Derby to visit Roseland Apizza, we knew we were in for a treat. This neighborhood joint has been extolled by none other than Roadfood guru Michael Stern, who calls Roseland “one of the great pizzerias in Connecticut, ergo one of the best on earth.” Although acknowledging Roseland’s myriad temptations—”honest bread with old-time character,” fried calamari with a “shattering-crisp crust,” and pasta specials ranging from lobster ravioli to a classic spaghetti and meatballs—Stern concedes that this is first and foremost a pizza place. “Whatever else you eat, you must eat pizza when you come to Roseland.”

Roseland has the added distinction of being good enough (allegedly) to challenge the supremacy of New Haven’s Big Three (Pepe’s, Sally’s, Modern). As one recent reviewer on Yelp.com puts it,

Anyone who complains about price or tries to compare Roseland’s to the commercialized, “sold-out” pizza joints in New Haven totally misses the magical spell that Roseland’s cast. At the end of the day no one can deny that Roseland’s is “one of a kind” and any of its competitors can only offer a good meal.

So despite the irony that our first NHPP pizza excursion would be in Derby, not in New Haven, we weren’t too concerned.

We arrived at Roseland after a wrong turn and a tentative creep through what seemed like a purely residential neighborhood, only to find a busy parking lot and the restaurant’s pink neon sign glowing like a beacon in the January cold.

The neon-lit exterior of Roseland Apizza, covered with January snow.

The interior confirmed what the exterior suggested: Roseland is a small-town New England kind of place, a pizzeria where closing time depends on how many people are in the dining room, where the waitresses know people by name and refer to the few they don’t know (read: us) as hon’. The place is small, with about eight booths and six tables in the main dining room. Dozens of specials, including tempting specialty pizzas topped with things like shrimp casino and oil-packed Italian tuna, are written on a blackboard. The requisite framed photos of family and famous patrons grace the walls, giving the restaurant an old-time feel much like Pepe’s or Sally’s.

In truth, the place is old: founded in 1935, eight years after Pepe’s and three before Sally’s, it ranks back there with the best of them and is surrounded by just as much legend. The current owner claims that serving pizza at Roseland was her idea, a plan that emerged when she was a 13-year old girl whose father’s bakery was struggling when gas prices skyrocketed during World War II. Admittedly, this account makes the Roseland pizza tradition seem more recent than its 1935 founding date, but as we can attest, the pizza is still damn good.

While other diners were slumped in their seats next to enormous, half-eaten antipasto platters and pasta dishes, we arrived hungry and promptly ordered some cream sodas and birch beer. Like other reputable New Haven-style pizza places, Roseland serves traditional Foxon Park sodas from nearby East Haven, which are slightly less sweet than Coke or Sprite since they’re still made with real cane sugar. For food, we ordered a medium red pie with mozzarella (or, in layperson’s terms, a cheese pizza), as well as a medium Roseland Special topped with sausage and mushrooms. When our server asked if we wanted fresh garlic, we hastily said yes.

The wait for food was long, maybe 40 minutes, and admittedly somewhat painful. But when the pizzas arrived, we were happy.

The red pie with mozzarella was a garlicky, cheesy delight, with a thin crust, even by New Haven standards. The cheese had a pleasant milky flavor and real texture to it—definitely not the watered-down supermarket shreds of lesser pizzerias. This pizza definitely wasn’t bland, a fact that was reinforced by visible streaks of orange oil and a pronounced saltiness. It was, however, lightly sauced, with tomato flavor playing second fiddle to garlic and cheese. And of course, one can’t forget that distinguishing factor of New Haven-style pizza: the crust. Here it was crisp and slightly charred, with only the tiniest bit of chew. A scant inch around the perimeter, it was neither thick nor particularly airy, but it also was not so thin as the razor-thin, nearly nonexistent crusts at New Haven’s BAR.

The Roseland Special, our second pie, was piled with mushrooms and sausage to the point where Stephen, reaching for a particularly weighty slice, found it collapse under the weight of its toppings. Undoubtedly delicious, the Special was a sort of textural explosion, with sausage that was tender and a cut above the standard stuff complementing the more delicate mushrooms and melty cheese. Garlicky like our other pie, the Special had an even thinner crust than its sibling, a testament to the homey irregularities of New Haven pizzas. 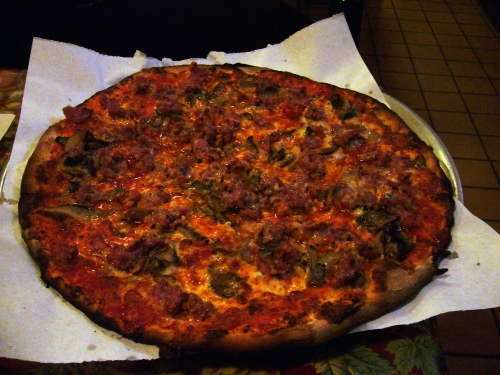 The house specialty Roseland Special was heaped with tender sausage and juicy mushrooms.

Overall, we thought the pizzas were proud examples of the New Haven style, and we had only minor criticisms. All of us found the pies to be somewhat on the salty side, and Margo noted that the crust was too brittle and thin for her taste. In addition, we all noted that tomato sauce is not a major component of Roseland pizzas: tomato flavor was somewhat lacking in both pies, even though the overall result was nonetheless balanced and delicious. The most notable element of the pizzas was the cheese.

We give Roseland pizza a four star rating, which celebrates it as exemplary New Haven-style pizza that falls only slightly below pizza perfection.

If you enjoyed this NHPP review, feel free to share it:

2 responses to “Pies Worth the Trek at Roseland Apizza”